Edited extract from Names of the Fish by Chris McCully

I've had many fascinating conversations with anglers about some of the strange names of our freshwater fish - why is a tench called a tench, a barbel a barbel and what on earth is a barnstickle? One such conversation resulted in the publication of a marvellous new Medlar book - Names of the Fish in British and Irish Freshwaters - meticulously researched and written by Chris McCully. Let Chris himself take up the story:

If we exclude the mention of the salmon and the eel in Bede’s History of the English Church and People (a work written in Latin in or around 731), the first time fish are mentioned in literature written in English can be dated to Ælfric’s Colloquy. Ælfric was a distinguished cleric who lived and worked in Winchester, Cerne and Eynsham towards the end of the 10th century and the beginning of the 11th. His literary output was astonishing: sermons, hagiography, grammar. Some of these materials were originally written in Latin and were subsequently Englished. The Colloquy, for instance, begins life as a primer intended to teach students Latin. The work was Englished either by Ælfric himself or more likely, by his pupil Ælfric Bata (‘the bat’). It’s this Old English version which appears in Mitchell and Robinson’s Guide to Old English – a guide which, appropriately enough, is intended to help today’s students engage with OE. Adjacent dialogues in Ælfric’s Englished text concern hunting and fowling, perhaps establishing a thematic pattern, much later (15th century) to be developed in the Book of St. Albans, which sets angling alongside hunting and fowling as a fit pastime for gentlefolk.

The following is an extract of the Colloquy translated from the original OE: 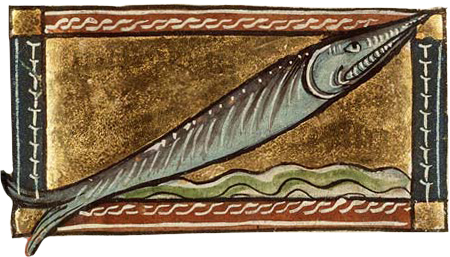 First, our familiar word for ‘pike’ is hacod – a term which may (albeit distantly) be related to hake; and second, the word for ‘trout’ is scēot, pl. scēotan. Because the combination of letter-shapes Colloquy and the occurrence of fish names in what becomes their angling context – in the manuscript pages of the Treatise of Fishing with an Angle (earlier 15th century), a work which Caxton’s successor, Wynkyn de Worde, bound together with further treatises (on hawking, hunting and heraldry) as part of the printed Book of St. Albans (1496). Yet this gap is filled with a great deal of lexical change and particularly, of lexical borrowing, principally from what at that time were the prestige languages of Europe, Latin and French.

If Ælfric referred to the trout as a scēot, where does the word trout come from? The OED records that the word occurs once in Old English, very late in the period (c.1050), as a borrowing from late Latin tructus. From this source possibly comes an English dialect word, truff (the OED records this as a south-western dialect term for the sea-trout). Yet the word was borrowed again from Old French (truite) during the earlier Middle Ages, and it is this form which gives us our word trout. That pattern – of an English word’s lexical space being occupied, as it were, by a borrowing from French – is fairly typical of the English Middle Ages and indicates among other things the prestige of French at that time. Languages rarely borrow from contact languages whose status is perceived to be somehow inferior and it’s noteworthy, too, that throughout much of the Middle Ages written court business was conducted in Latin or French. It was only in the 15th century that English was officially adopted as the language of administration and government.

This pattern of borrowing, replacement and/or remodelling seems to have been maintained throughout the Middle Ages. It must have been, in order for the lexicon of freshwater fish to develop into the mature vocabulary found in the 15th century Treatise, a work whose printed version dates from 1496 but which also exists in an earlier form – a substantial manuscript fragment of the later printed text – dating from the period c.1420-50. The fish terms found there seem remarkably modern:

Ye shall understande that there is syxe maner of anglyng. That one is at the ground for the troute and other fysshe. An other is at the grounde at an arche or a stange, where it ebbeth and floweth: for bleke, roche, and Darse. The thirde is with a flote for all maner of fysshe. The fourth with a menow for the Troute, without plumbe or flote. The Fyfth is rennyng in the same for the Roche and darse, with one or to heares and a flye. The syxte is a dubbed hooke, for the Troute or Graylyng.

You must understand that there are six ways of angling. One is on the bottom for trout and other fish. Another is on the bottom – at a bridge-arch or landing-stage where the water ebbs and flows – for bleak, roach and dace. The third way is with a float for all kinds of fish. The fourth is with a minnow for trout, without any lead or float. The fifth is dibbing for roach and dace, with one or two hairs [a thin casting-line made of horsehair] and a fly. The sixth is with a dubbed hook [an artificial fly] for trout or grayling . . . [McCully translation]

The Treatise also mentions the salmon (‘The Samon is a gentyll fish’), the barbel (‘The Barbell is a swete fish’), the carp (‘The Carpe is a deinteous fish’ – yet, the author added, ‘there be but few in England’), the chub (which the author called a chevin – ‘The Chevin is a stately fish’) and many others: bream, tench, roach, perch, dace, bleak, ruffe, flounder, minnow, eel. It’s not so much that the enumeration of species is impressive (although it is); it is rather that the lexicon seems almost contemporary. That is almost certainly so because angling for these species had developed over two or three centuries before, giving a relatively settled nature not only to fish terms themselves but also to the description of angling techniques.

Yet not everything in the fish lexicon was wholly settled in or by the 15th century. As written and printed works reached a wider circulation and as authors availed themselves more widely of printed sources perhaps written in slightly different forms of English to their own, there came puzzles as to what, precisely, to call certain fish. Did one write chub or chevin? pike or luce? Our old friend Izaak Walton, writing in the mid 17th century, hedged all bets in his chapter headings:

Walton’s famous characters Piscator and Venator also refer to the ‘Chub or Cheven’. But that’s another story, amongst many others, expertly explained in Chris McCully’s marvellous new book The Names of the Fish. 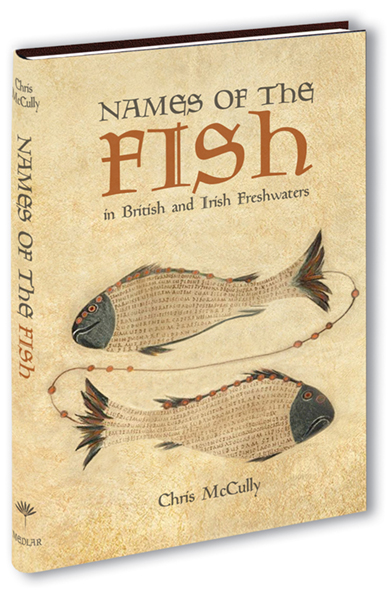