​ Fishing for a Year

This present piece is written by a defeated adult angler. I lie in the grass within a yard of the water - chalk-stream water - and have just finished a letter to a seven-year-old friend, reassuring him of the promise that he shall be taught to fish this summer holiday.
MThe late afternoon sun throws the shadows of buttercups across the paper and every other sentence I write is accompanied by the sound of three trout rising. Plop-splash-splatter. Without looking up I can tell which is which because I have given these three trout a good deal of time and attention. I cannot catch them. Upstream and downstream more trout are rising, feeding well. And I can’t catch any of them either.
MThere are plenty of mayfly - the female spinners are dropping on the water - but the fish are not taking them, nor the olives or alders or capering surface flies. They are not nymphing, apparently, but making clean surface rises. Nevertheless, I have tried them with a nymph as well as all possible versions of the above-mentioned, thrown them the five-nought smut that I keep in the corner of the box, and broken the rules to drift down a wet mallard-and-claret with a fancy jerking motion. All these lures have been presented with the greatest stealth on finest 5x gut. The trout were not put down. They allowed my offerings to pass and went on feeding uninterrupted, and while they continue to do so I have written to say that I will teach my young friend to fish!
MLet memory give comfort. The great pike from the deep hole at Sandy Balls; the first salmon in Ireland, caught within five minutes of putting the rod up; the trout that lay under the mill-hatch; the roach in the glass case, stuffed a bit lumpy and touched up with silver paint. We know enough to start the boy off. He must begin right at the beginning, catching small stuff with primitive tackle in elementary waters.


Quite seriously, when children begin to fish very young they should do so with no more than a long withy stick and a piece of line of just about the same length tied to the end of it. I have seen a too fortunate boy struggling with the beautiful little roach-rod and reel that his father had provided. He was disheartened and tangled, and even when I took off the reel and tied some line to the end ring, the top was too springy and each jerk hung up the wet line round it. A withy stick it should be, or a garden cane with enough taper to allow just a little give. A small goose-quill float. For the bottom tackle it is best to stick to the little hooks that Woolworths sell with a yard of nylon attached direct to them. Thus equipped, the boy should begin by catching Tommy Ruffe. Even on grounds of name alone he is a perfect children’s fish. You’d expect to find him as a character in a Beatrix Potter book.
MThe Tommy Ruffe, or Pope, is a small cousin of the perch, very similar in general appearance, with the same spiky dorsal fin, but coloured in shades of dull brown and green. At his maximum growth he lies easily in the palm of your hand.
MAlthough localised, Tommy Ruffes are common in places that suit them and these are usually quiet places where a child can make a start without coming up against the problems of running water. On the Thames I have found them in big shoals in the quiet channels between the islands and the river bank. It is here that we shall go in the summer holiday with our stick and a tin of garden worms.
MLesson One - as we are coarse-fishing - is to try and gather the fish to us and put them on the alert for food. Half a dozen of the worms must be broken into small pieces - the boy pupil will have no objection to this duty - and scattered over the water immediately in front. Then three-quarters of an inch of a worm’s tail is fixed on the little hook.
MThe Tommy Ruffe bite greedily and hang on. The float goes down decisively. However much time is lost to the young fisherman through excitement and clumsiness, he will land them without difficulty, and when he has landed one he will want to keep it. The first captive is so precious that a child is distraught at the idea that he might be made to put it back. An earlier young pupil began with a dace and for days he kept it, sick and uncomfortable, in a bucket. When told that dace need fresh running water, he took to changing the water in the bucket every half-hour and the fish spent a good deal of time on the grass. At last it was returned to the river to the accompaniment of tears.
MThe Tommy Ruffe, however, is a good aquarium subject. One of the victims of Lesson One may be established in a fish-bowl, and he will thrive on worms and bluebottles and shreds of meat.
MFor Lesson Two, some difficulty must be introduced, and it is best to find fish that bite quickly and need striking. In the small eddies of slow rivers - there are ideal ones on the Bedford Ouse above Tempsford Sluice - in these small eddies the baby roach and chub congregate; shoals of them about the size of sardines. There is some movement of the water, but as it is circular the float will go round and round and the short line is still good enough. This time the groundbait will be broken biscuit crumbs, crushed fine with a rolling pin, and the hook-bait a single maggot.
MWe shall learn a number of things. The quill float will flicker instead of plunging down and at first the child will be too slow to catch the bite. Next he will strike enormously, throwing the tackle, and sometimes a little fish, right over into the bushes, until at last he gets the knack of a quick but steady pull that one day he will take along with him to the trout-stream. A small foundation stone is laid.
MAs the bites fall off in number he must give the eddy a rest and then sprinkle it again with biscuit dust. Next time round the float can be raised and lowered to discover at which depths the most bites come, and to reveal the truth that the deeper we go the bigger fish we shall catch. One or two of these eddies will do for an afternoon’s fishing, and at the end the catch will go back into the river because we are off happily home with a pinch of maggots saved for Tommy Ruffe.
MThe special delight of Lesson Three is that we shall catch a fish and eat it. A gudgeon. If we go about it properly, a frying-pan full of gudgeon. We shall put the withy stick aside and try a rod and reel, though not one of the so-called boys’ rods; the crankiest second-hand genuine rod is better than one of those. In fact, I shall lend him my little seven-foot spinning rod with an Aerial reel and a roach line. His bottom tackle will be as before. 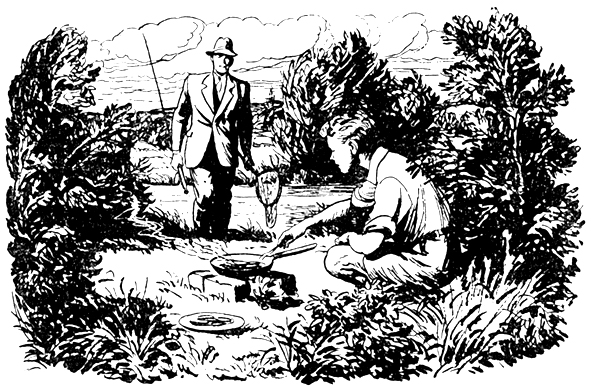 MThe perfect place for our own gudgeon lesson lies below Tempsford weir, above which we have been fishing, just where the little River Ivel joins the Ouse. In the last two hundred yards of its individual existence the Ivel is fifteen yards wide, clear water running quite fast at nearly the depth of your gum-boots . . .
M. . . That is where I shall take my beginner for his gudgeon fishing. He will stand barefoot in the Ivel, stir things up and discover a little about fishing far off; first stripping off line from the reel and letting the float run down, then later removing the check and allowing the reel to revolve under control of one finger. And he will learn to grease his line to stop it sinking . . .